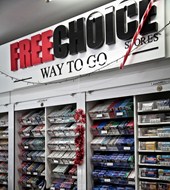 Using a combination of in-depth interviews and near-real-time electronic diary data collected from 31 smokers and attempting quitters, we examined their responses to exposure to tobacco outlets.

The findings provide the first evidence that even in the absence of POS displays, the mere sight of tobacco retail outlets can trigger impulse tobacco purchases and increase smoking frequency. The findings support calls to restrict tobacco distribution.